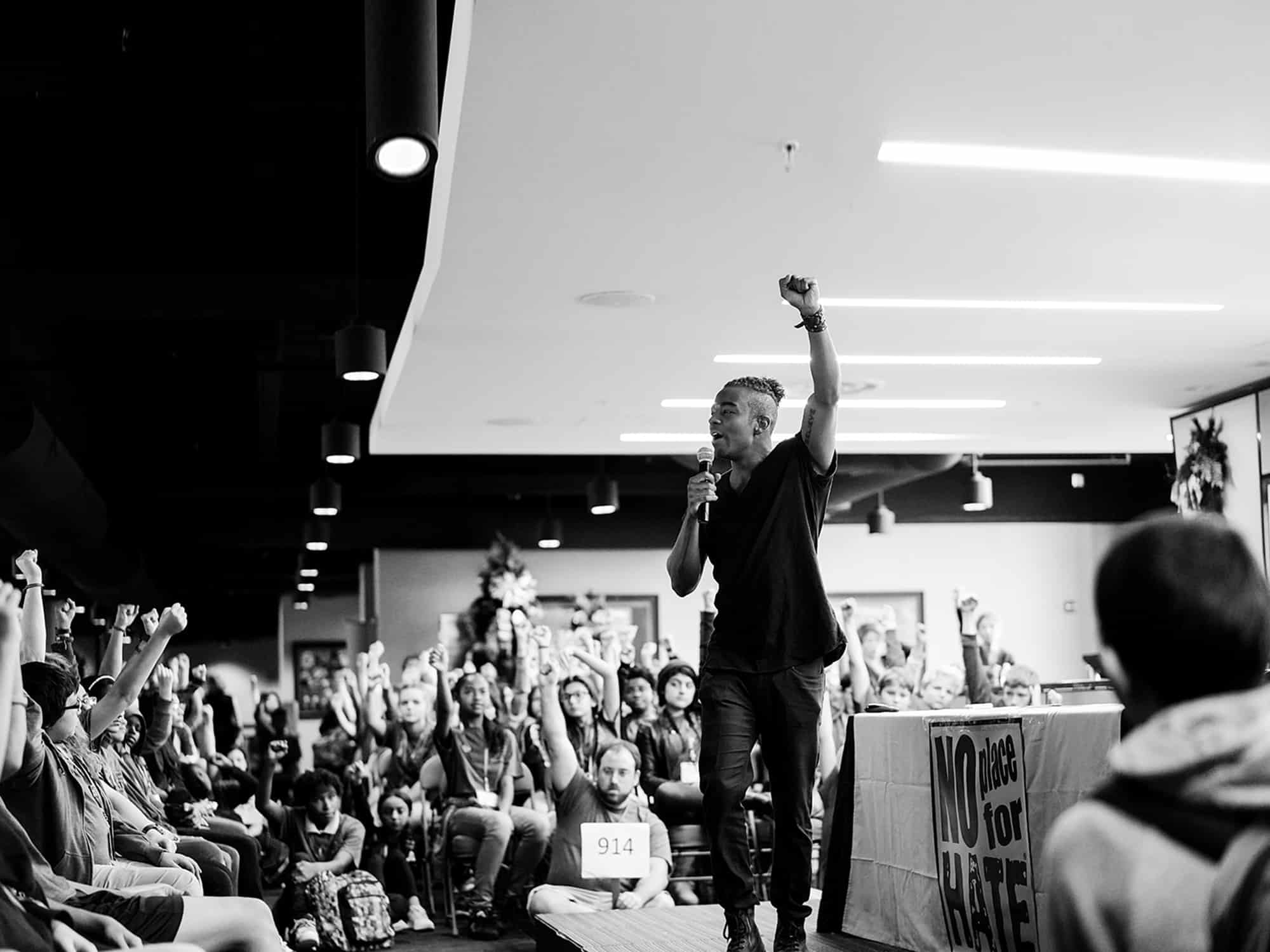 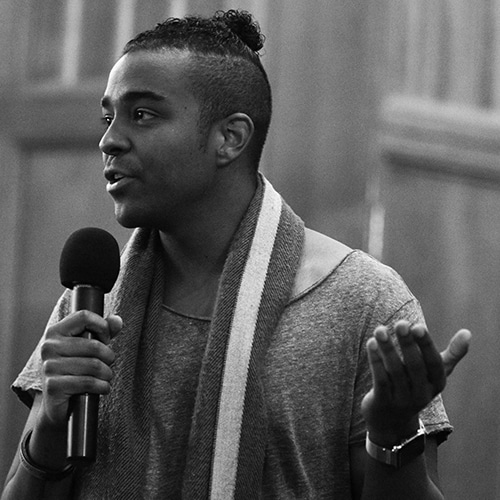 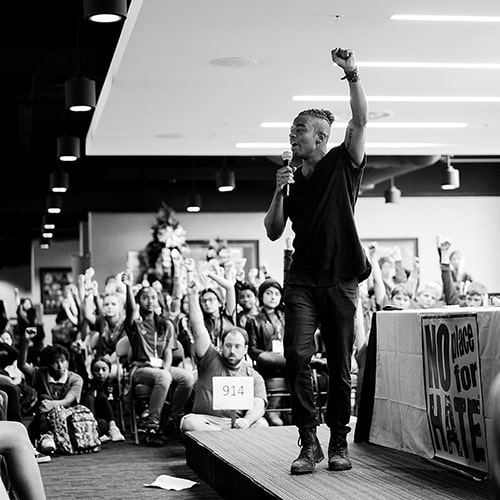 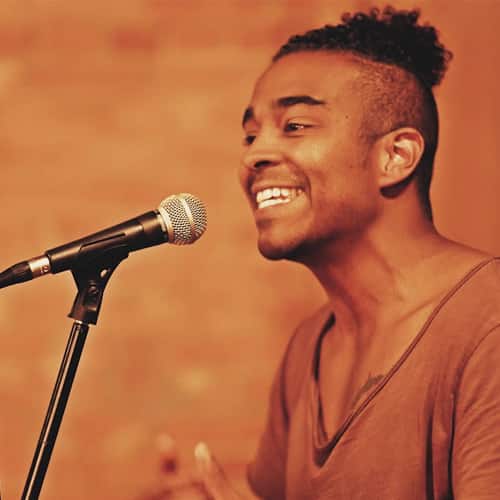 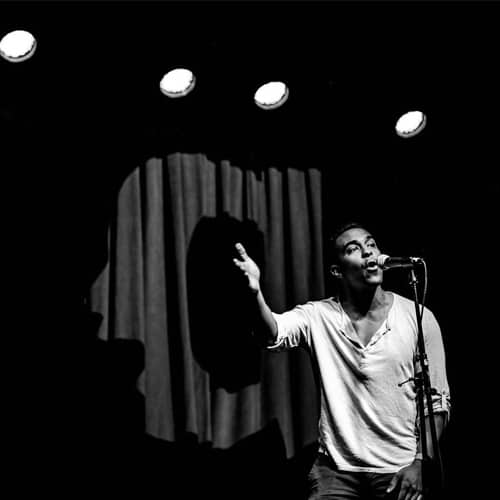 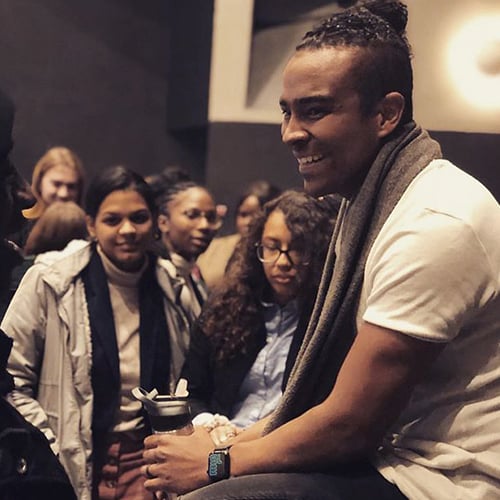 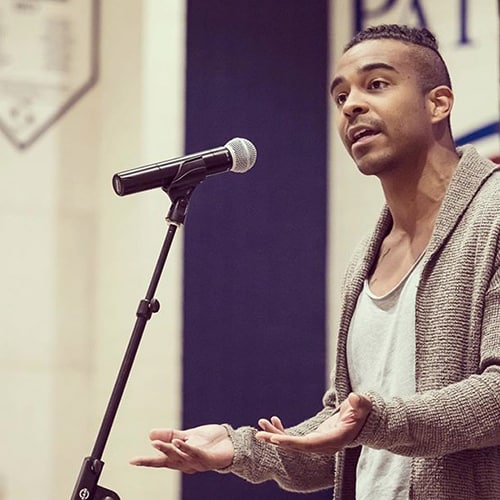 “Andre is not only a talented poet but his skill at making people feel comfortable with the slam poetry medium was evident. His poem “Crayon Box” became the theme of the event which was to celebrate diversity of every kind.”

Andre Bradford, a.k.a. S.C. Says, is an Austin based slam poet who has been performing slam poetry since 2013. He’s toured and featured at venues, universities, and conferences across the country, and his work has been featured in the Huffington Post, The Edge radio, The Culture Trip, and Blavity. He is a two time Austin Poetry Slam Champion, a three time Texas Grand Slam Finalist, and was a member of the 2015 National Championship Team. He also once popped a bag of popcorn without burning a single kernel, which is arguably one of his greatest achievements.

His poetry covers a gamut of topics ranging from being mixed race, to gun control, to mental health awareness, to never settling in relationships. Slam poetry is an art form he loves due to its raw vulnerability and it’s ability to cultivate transparency and encourage dialogues into many different walks of life.

Kintsukuroi: On Empathy and Other Things

This is an hour length show that focuses on the importance of empathy in being a decent (less terrible) human being. Using slam poetry, I cover topics like racial discrimination, impulse assumptions, mental health, and moment to moment living. I use these poems to illustrate just how often we don’t take the time to understand the people around us. The show weaves laughter, honesty, humility, and heartfelt pain to reveal that the broken things in ourselves and in others are often what become the most beautiful, and ultimately what connect us.

I love Slam Poetry, and pride myself of producing poems that cover a wide range of topics. From never settling, to racism, to gun control, to searching for love, I always try to blend poignance with humor to better connect with a broad range of audiences. My feature sets range from 30 minutes to an hour, and are flexible around other show timelines and topics.

Want to have your own slam poetry show featuring your local artists? Hosting is an integral part to creating a show that is both enjoyable and memorable. I host shows ranging from 30 minutes to 2 hours, depending on your needs and how many poets will be performing. I am also available to host and feature the same show.

I love inspiring the next generation of writers and performers, especially because I know how difficult it can be to just pick up a pen and write anything. My workshops focus on cultivating and expressing your unique experiences into ways that are engaging for readers and audiences alike.